Published on Programming Librarian (https://programminglibrarian.org)
May 26, 2009
By

Editor’s note: This is the second entry in a three-part series by Jude Schanzer. Read the first entry [2] and the third entry [3]. 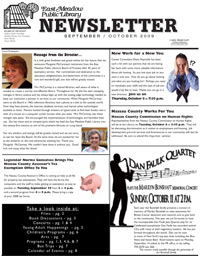 In my second interview with John Franzen, he sat me down and said, “You’re hired. Want the job?” I, ever articulate, said, “Ummm. Yeah?” I had a feeling there was more to come. (Actually, I think John wanted my Rolodex and didn’t know how to get it without me attached.) He gave me a number of mandates. One of the items on his list (which was quite long) was to improve the programming. He wanted first-class performers and academics. Another was to bring in people who do not use the library: those without small children, those who are not retired, and teenagers. Two things went through my mind: wondering what I had gotten myself into, and, in order to make the last mandate possible, we had to make the library a place that people want to go to, not a place to go to as a last resort. We have to make the library “cool” or “hot” or whatever a place now has to be to be the IT place of the moment. I told him it would take me at least five years before we would see a tangible change in our programming and the attendance.

Though a little nervous, I left his office feeling elated. This was my first nine to five job. Yes, that is true. Throughout my adult life (which is now the overwhelming majority of my life) I have been a theatre director, college professor, teaching artist, and developer of arts outreach programs. None of these are standard forty-hours-a-week jobs. No siree, not for me. I opted for a career that is a life style. I always worked all day, all week, all year. This was to be my no stress, nine to five, Monday through Friday job. Yes, I was a fool! We all need to be educated occasionally, I clearly need to be educated all of the time. I forgot.

I started my job by looking at what libraries offered for programming on Long Island and around the country. I thought that I had time for some laid back, interesting research. John Franzen came into my office a week after I had started and announced that the fiftieth anniversary of the East Meadow Public Library was imminent. If we went by the date the charter was issued it was immediate. If we went by the date the doors opened—a year. I chose “doors opening.”

When asked what kind of event he wanted he said (I am not kidding here), “BIG.”

“Big Band, take over the library—Big?” I said sarcastically.

Who in their right mind would let me take over a library to present a concert? Well … John.

So, I dove headlong into a fit of despotic megalomaniacal euphoria. I was allowed to keep the library open after hours and hire a hot big band; merchants donated food and servers, the Chamber of Commerce pitched in, our Board president blew up balloons with my younger brother, my older brother developed educational materials for the support programs, my husband put in a professional sound system, a friend at a near by regional theatre loaned us orchestra chairs, and my staff of two was exhausted doing everything else a large event demands. I had used up every friend, connection, and family member I had, but on the night of the BIG event 1,200 people of all ages and walks of life streamed through the doors to hear a big band in the Library, dance in the aisles, and have a great time.

You cannot do this alone. Your administration and staff must be supportive in an active way. I am extremely fortunate in my job. I have the essential ingredients to make my work possible. I have been blessed with two wonderful directors. John Franzen understood what I did as a professional and he allowed me to do it with little interference. He knew that the arts and the library could coexist and benefit each other. He respected what I do. Carol Probeyahn is now the director. She encourages me to do what I do. Actually, I think she is a glutton for the arts and large events. Because of the success of that first big band concert, I get to take over the building a number of times a year for arts programming. People come from far and wide for the experiences, and we have a vibrant Sunday performance series with terrific attendance. The programming and public relations department has a staff of three people, all of whom have backgrounds in the arts and rejoice in bringing the arts to the public. I could not do without my two co-workers; Linda Soldo, who acts as a general manager would, and Kelly Gordon, the graphic artist who is really the marketing expert. More phenomenal still, the Board of Trustees is behind me 100 percent.