When I started as library director in the tiny town of Meservey, I never thought we would be able to pull off large-scale programs like libraries in big cities did. Those types of programs aren’t in our budget, and it’s hard enough getting good attendance at our smaller events. The payoff, I figured, probably wouldn’t be worth all of the money and time spent.

I am thrilled to admit that I was wrong, and that tiny libraries like mine can, in fact, have big events that are just as successful as a library 10 times their size. 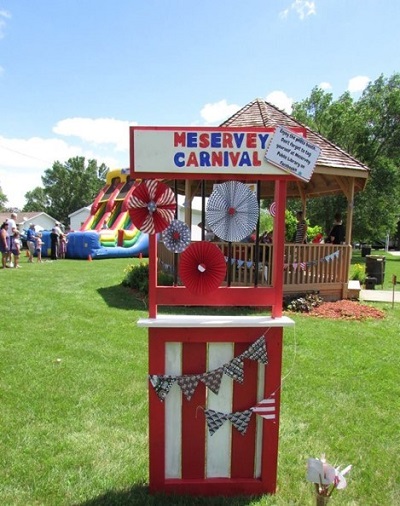 A collaboration leads to a carnival

Meservey has always had an annual Fireworks Day a few days before the Fourth of July. Breakfast is served in the morning by a local church, then the fire department hosts a dinner at night right before the fireworks.

The library had never been involved … until two summers ago. That’s when I was approached by someone on the fire department who was wondering if the library might want to do something for children to help fill in that gap in time between breakfast and dinner.

I’m pretty sure they were expecting me to plan a story time with a few crafts and maybe a snack, but my response — for whatever reason — was “I want to plan a carnival!” I choose to blame Pinterest for this; there are so many cute carnival-themed birthday parties on Pinterest, and because of this, thoughts of face-painting and ring-toss games ran through my head when I was asked to participate.

I had no idea what I was getting myself into.  t would turn out to be more than worth it, but who knew a carnival would be SO much work?

Ask, ask and ask once more

I started by fundraising. A local bank gave us $750 toward the carnival, and we were able to raise $850 by doing a baked potato bar fundraiser. When renting inflatables and carnival games, I asked for discounts wherever I went; most people said no, but some said yes, and that was a success in my book.

I found a local family that was willing to bring some goats, rabbits and donkeys for a petting zoo at no charge as long as they could put out some 4-H information, which I was more than happy to do. A local butcher who is known for his kindness and generosity provided hot dogs — 300 of them! — at no charge. The town bar owner offered to donate bags of chips and ice for the Sno-cone machine we rented. Board members donated things like condiments for the hot dogs, packages of soda and water they found on sale, and paper plates. 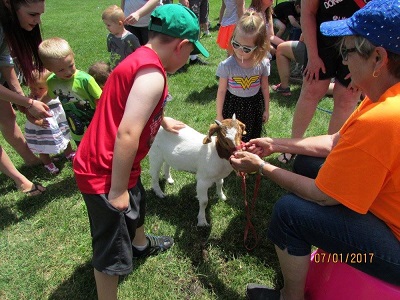 With all of those generous donations, I barely had to spend any money on this event. The two most expensive things were the inflatable rentals ($850 for three pieces) and the insurance that we had to have for the petting zoo ($550). However, those were completely covered by the bank donation and our earnings from the fundraiser.

I ended up purchasing the following with library programming funds: Sno-cone syrup (cheaper on Amazon), temporary tattoos and face-paint, several prizes to give away (found deals on Amazon and Target Cartwheel), one grand prize (one year a tablet, the next year a drone — I found deals on Black Friday), bottled water, hot dog buns, two carnival game rentals, and a few décor items.

That was it! In all, we spent about $300 from our programming budget.

I am lucky to have a crafty family; my brother built a water balloon slingshot for the event, as well as a ticket booth that we used as a photo backdrop. My sister-in-law made an adorable elephant that doubled as a donation box. Our high school dance team volunteered to do the face-painting and temporary tattoo applications, and many community members showed up to help set up, serve food and clean up after the event.

The jitters are normal

I was terrified the day before the carnival.  I had broken down into tears several times in the weeks leading up to it — I had taken on too much, and I was afraid that no one would show and all my hard work would have been for nothing.

There ended up being nothing to worry about because it was a HUGE hit. We had 300 attendees the first year and almost 400 the second — more than the entire population of our town. The entire event was free, but we had a donation bucket by the food as well as the donation elephant. The first year, $750 was donated; the following year, $1,200. That is huge for a town like ours! 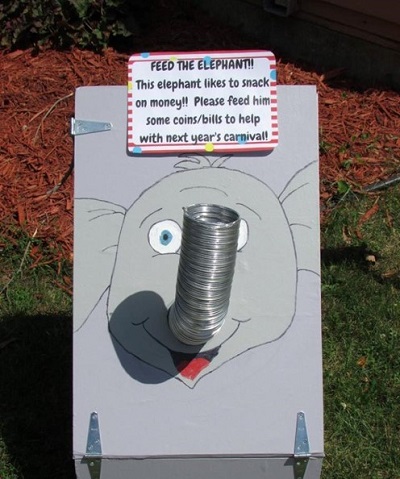 I received the most amazing feedback, and it was clear that an event like this was badly needed in our community. The carnival is now an annual event that my patrons talk about frequently. This summer will be our third carnival, and though it’s a LOT of work, I love seeing how happy it makes the town.

A few words of advice if your library takes on an event like this. First, ask for help. My board members, family and volunteers were absolutely wonderful and so much help during the event; however, leading up to the event, it was all on my shoulders. Planning, sending emails, making phone calls, picking up supplies … it’s a lot.

Don’t do what I did and try to do it all yourself — you will definitely burn yourself out. Have some community members, patrons or staff you can rely on to take on some of the work for you. Also, never be afraid to ask for a discount – the worst they can say is no.

Advertise the event as much as humanly possible, and remember to tell every patron — word of mouth in a small town is everything! And finally, don’t shy away from a program you are excited about just because it’s a large event or you’ve never tried it before.  If my little library can pull it off on a tight budget, you can too!