As library workers try to reach patrons virtually while social distancing, many are turning to videoconferencing platforms like Zoom, Facebook Live or Google Hangouts.

Taking library programs online can be effective at reaching audiences that are connected to the internet. And videoconferencing has other benefits: it is cost-effective, you can reach people far outside your service area, and it may be a draw for community members that can’t or don’t visit the library in person (think parents of young children or people with disabilities).

But there are risks — like “Zoombombing,” which occurs when unwanted people enter and disrupt your online event, either as a prank or something more serious, like hate speech.

Anthony Wright de Hernandez, community collections archivist and inclusion and diversity coordinator at the Virginia Tech University Libraries, experienced it all when he recently took a planned in-person lecture series online. We talked to him about what worked and what didn’t. 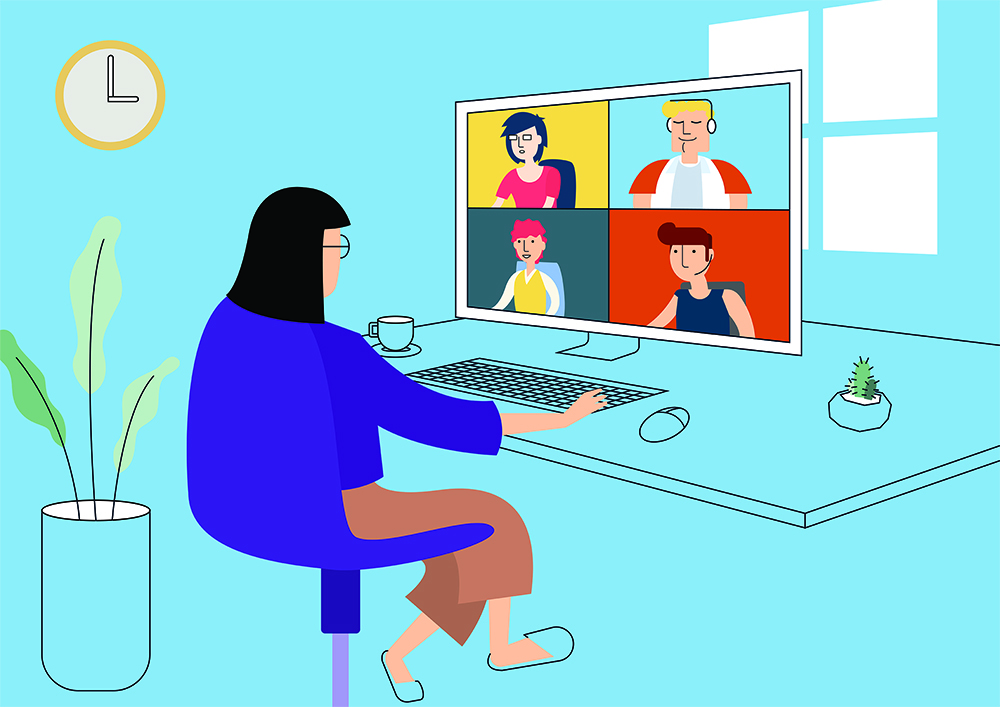 Virginia Tech University Libraries was about to host a traveling exhibition and lecture series when COVID-19 happened. But you managed to pull off the lecture series anyway. How?

In my experience, the one constant with event planning is that something always goes wrong. Anticipating potential problems and having an idea of how to respond to them is part of the planning process. I never considered the potential of a global pandemic, though.

Our library was scheduled to host the Americans and the Holocaust [2]traveling exhibition from ALA and the United States Holocaust Memorial Museum from March 16 to April 29. We had planned an opening reception, two invited speakers, two book reading events, a film series, were in the process of scheduling high school field trips, and were co-promoting a Shabbat dinner and a reading of the names event with our local Hillel Center.

By the time COVID-19 started making headlines, we were well into promoting the exhibition and had listed our events on the library, university and community calendars. We had also reserved spaces, created assessment plans for the exhibit and programs, started purchasing traditional Jewish snacks to have at the events, and booked travel and hotels for our speakers.

We proceeded to set up the exhibition on March 9, a week early, because it was spring break and set-up was easier with fewer students in our commons area. In a nod to the growing public conversation around COVID-19, we stationed hand sanitizer dispensers near the exhibition’s touchscreen kiosks. While we were setting up, one of our speakers emailed me to ask if we were still planning to host them on campus, and I assured them that we were. Little did we know.

Then things started happening quickly. On March 11, Virginia Tech announced that spring break would be extended for an additional week (our planned opening week for the exhibition) and that classes would be online-only when they resumed. On March 12, I decided to cancel our opening reception and move our invited speaker and book reading events online. The field trip planning ended. By March 16, we had canceled the film series. A week later, our library closed to everyone except for Virginia Tech faculty, staff and students, and on March 31, following our governor’s executive order, the library closed.

What made you move the series online?

I went into triage mode. I completed my MLIS online, so I had experience with online lectures and meeting tools. I set up Zoom meetings for our speaker and book reading events and updated our exhibition LibGuide [3] and the various calendars where the events were listed. I tried to figure out how to move the film series online but the logistics and legal considerations around streaming movies online were too complicated.

Both of our invited speakers were willing to deliver their talks online. We had to cancel one of the book reading events when our moderator needed to withdraw; the other reading session had to be modified. It was originally meant to have book passages read aloud followed by open discussion. In the online format, our moderator became more of an expert speaker answering questions after the readings.

The biggest challenge in converting these three events was making sure we would have an audience. With the lectures effectively detached from the exhibition, they had to stand on their own as draws for attendance and they were competing with myriad distractions as people adjusted to stay-at-home orders and transitions to remote work. To maximize our attendance, I invited the other host sites for the exhibition. This helped us have between 20 and 35 attendees at each event with people joining the online sessions from as far away as Hawaii.

"When (the Zoombombing) first started, I didn’t realize what was happening. I thought someone had just accidentally unmuted themself. So I muted them. Then, others started unmuting, and it became clear what was going on." — Anthony Wright de Hernandez

Did you have previous experience running Zoom events?

Zoom was new to me, but it was easy to use. I set up my three events as meetings in Zoom. Had I known more about the platform, I would have requested access to create webinars [4] (a feature that costs extra) and used that option instead.

Based on my experience with online conferencing, I arranged to have our library’s instructional support assistant join the events to help manage the sessions. He monitored the chat, helped with technical issues, and dealt with problems. He was invaluable when our second event became the target for some disruptive behavior.

That “disruptive behavior” is also known as “Zoombombing,” right? Tell us what happened.

Our first Zoom event [5] happened early in the pandemic; people were using Zoom more, but we had only started to hear about Zoombombing. We put very few restrictions on the event attendees. We tried to incorporate some Q&A polls into the event with mixed success (I hear these work much better in Zoom webinars than the Zoom meetings). We offered people the chance to ask questions verbally or post them in the chat. Most attendees chose to type questions into the chat, so I read them aloud for our speaker to answer. Overall, the session went well and the feedback on it was positive.

Our second Zoom event [6] was originally planned to coincide with Pride Week on our campus, so the speaker was talking about gay men and lesbian women in Nazi Germany. Public awareness of Zoombombing was much more prevalent by this point, and I anticipated that we could be a target given the topics.

Everything started smoothly, but we were hit with some Zoombombing about 20 minutes into the event. Seventy-seven accounts joined over the course of a few minutes and began making disruptive comments and typing curse words into the chat.

Wow. That must have been upsetting. How did you handle it?

When it first started, I didn’t realize what was happening. I thought someone had just accidentally unmuted themself. So I muted them. Then, others started unmuting, and it became clear what was going on.

Thankfully, we got the waiting room in place before too many of them got in, so we only had to remove about 15 or so people who were in the meeting and causing disruption. The other 50 accounts that joined never got past the waiting room.

How did the speaker react?

We had a couple of minutes of disruption to the event with people interjecting immature and vulgar comments audibly and in the chat. Our speaker handled it with grace, and the event attendees were patient while we addressed the situation.

We were able to get things under control and proceed, but I learned a lot more about Zoom as a platform after the disruption. The biggest thing I learned was that public events on the platform really need to be done using the webinar set-up rather than the meeting set-up.

Sadly, we were not able to admit anyone to the event after that unless one of the event hosts knew them personally. So I don’t know how many latecomers might have been unable to join.

We recorded the session and the incident is part of the recording [7] (Zoombombing incident occurs at 23:32), so others can witness and, hopefully, learn from it. 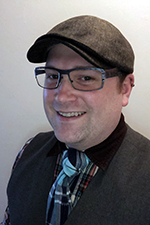 Did you find out who or what group was behind the Zoombombing?

After the session, I looked into who had been involved in causing the disruption. In reviewing the logs from the session, the accounts joining included high school and college accounts from Florida, North Carolina and the United Arab Emirates, as well as various essentially anonymous accounts. None of them were identifiable as students from our institution, and I left it at that.

Did that experience affect the way you ran your third online lecture?

Despite what I learned from the second event, our final online event [8] went forward as a Zoom meeting rather than a Zoom webinar. The link had already been shared widely, and I couldn’t change it even if I had access to create webinars.

In response to the incident during the second event, I locked things down for the third. Attendees could not share their screens, display video, unmute themselves or send general chat messages. The only way attendees could comment or ask questions was by directly messaging one of the hosts in chat.

This put a lot more pressure on our speaker. The event was originally supposed to have book passages read followed by open discussion. Instead, the moderator had become a featured speaker. He did some introduction and then we read book passages and asked attendees to submit questions to the meeting hosts. We read out the questions and our speaker answered them. Feedback on the session was good, but it was much more restrictive than I would have preferred.

Looking back, what are your main takeaways from the experience? Would you do it again?

My main takeaway is that I had not sufficiently planned an online component for my events in the first place. Our institution has multiple locations, and we are encouraged to find ways to include our other campuses in events happening on the main campus. If I had put more effort into planning the online portion of my events before moving them fully online, I would have been better prepared. Instead, it was a scramble, and I didn’t have time to fully learn the capabilities of the platform I was using.

With the benefit of hindsight, I would create my events as webinars rather than meetings. Zoom’s webinar tool is designed to mimic a lecture hall or auditorium setting. It includes better features for Q&A while limiting the ability of attendees to disrupt the session.

I would go through the event’s security settings [9] to ensure that attendees cannot share their screen, share video or unmute themselves. I would also prepare the speaker and other hosts for how we would respond to a disruption. Finally, I would arrange in advance for live captioning of the event to make the event more accessible and reduce the processing needed for the event recording.

Even with the issues I encountered, I would absolutely do it again. I work for a land-grant university that has a culture of service. Our motto is Ut Prosim (That I May Serve). Hosting the traveling exhibition is one of the ways I serve our community. Moving as much of our programming online during this time allowed me to serve a broader community by providing a thread of continuity during a time of great disruption. I feel like our events were worth doing and feedback from the audiences agreed.