Unfortunately, unearthing the time capsule was not the joyous occasion the community anticipated. On June 20, 2020, residents dug up the pine box to find it destroyed by water and most of its contents ruined.

Loudon Library Director Kate Clabough spoke about the library’s role in this discovery and how a few kind gestures helped residents cope with the disappointing time. 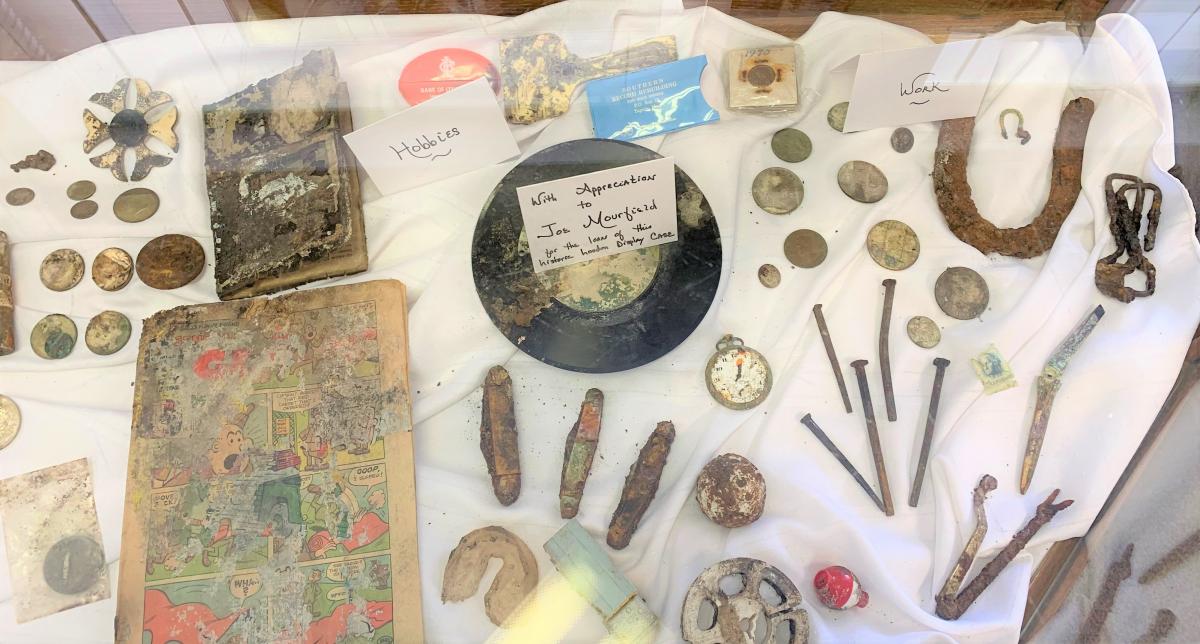 Tell me a bit about your library and the Loudon community.

Loudon County was formed in 1870 from portions of three surrounding counties. There’s a beautiful natural landscape here with lakes and rivers and views of the Smoky Mountains. The county and the city of Loudon have a very quaint and historic feel.

The city of Loudon has around 5,000 residents, and the county has five libraries. At the Loudon Library, it’s just me and a part-time staff member. I started about nine months ago and came into a library that is very different from what it is today. The librarian before me was here for 39 years and there was never any programming, not even story times. I am very program-oriented so I knew that had to change immediately. There are people in town who didn’t even know we had a library, so I consider it my job to put us on the map.

A few months into my time here, I joined the Loudon County sesquicentennial anniversary committee, and that introduced me to the time capsule. People were very much looking forward to it.

What was it like to unearth the time capsule and see it ruined?

Loudon has had some tough times recently. The historic courthouse, which had been a symbol of the county, burned down last year. The sesquicentennial provided a little light for us to move forward from that loss.

When we opened the capsule, the pine box was disintegrated. The box had been buried in a concrete vault, but the vault had failed and the lid had caved in. The committee noticed that some moldy, muddy sludge had formed underneath some of the fragments. Underneath that, there was a plastic sheet. The plastic sheet is the only reason why we were able to salvage a few things.

The committee took the sludge over to someone’s garage and laid it on tables to dry. Once it began drying, they discovered coins and a horseshoe and some other sports-related memorabilia. Unfortunately, there was no master list, so we have no idea what was originally in the box, and we don’t have any context for the remaining items.

That’s awful! Did any of the letters survive?

We managed to save some scraps of letters and some photos. One of the letters comes with a great story! A little girl named Olympia was given an index card by her grandmother in 1970 that said, “Be in Loudon, Tennessee, on June 20th of 2020.”

Olympia has since moved out of state, but she always remembered that card. As the date approached Olympia contacted the head of Loudon tourism, Rachel Carol, to see if a ceremony was taking place. Rachel had to break the news to her that the time capsule was ruined and there was nothing left. Of course, Olympia’s heart was broken because she was expecting this letter from her grandmother.

Amazingly, one of the things that made it almost intact was Olympia’s letter! Olympia came in from Atlanta and met up with her cousins like their grandma told them to do those 50 years ago. Unfortunately, there was no sesquicentennial anniversary because of COVID, but we had a virtual one.

How did the library get involved in all of this?

The committee was trying to figure out what to do with the handful of things that made it. The library has a good-sized space and we’re centrally located, so the committee asked if we could house the remnants here. Someone donated a glass display case and we laid everything out so people could look at the remnants.

We used acid-free paper and laminated the remaining bits that were left. So many of these things are incredibly fragile; they will literally turn to dust with a slight poke. My husband and I are both graphic designers so we plan to make a large graphic display with scanned photos of the items that we can keep here and give to the other libraries in the county. 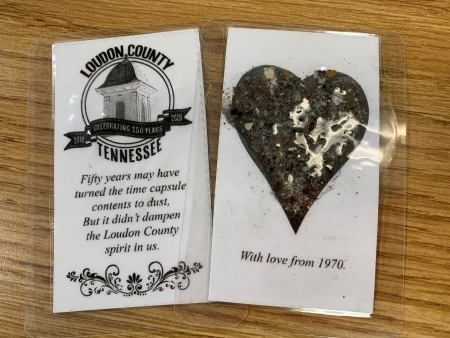 How have people reacted to the display?

This is where my new side gig as a time capsule grief counselor started. The people of Loudon are all so connected to their history and their family lineage that this loss hit them hard.

People cry and share their disappointment. They tell me their grandparents promised a letter for them or that they moved away years ago and were looking forward to coming back specifically for this time capsule. It’s a lot to take in! We’ve also gotten people who are angry and frustrated with nowhere to place that anger.

What kinds of things have you been doing to help Loudon residents?

I made these laminated cards that say, “Fifty years may have turned the time capsule contents to dust, but it didn’t dampen the Loudon County spirit in us.” I took some of the dried remnants and formed them into the shape of a heart. I can’t give people their grandmothers' letters, but I can give them this.

This gesture seems like it’s helping. When they come and look at the display, I listen and make sure that they can pour their hearts out. And with this laminated card, they get something tangible that they can take home and keep or pass down forever.

Are there plans for a new time capsule?

Yes! Depending on how things are with COVID, the committee is hoping to dedicate a new time capsule in November. We now know that burying isn't the best choice, so we’ll do things differently this time.

Here at the library, we have a burned timber that came from the old courthouse. It’s red oak and a beautiful piece of wood, minus some charring on the outside. They’re going to build the new time capsule box out of this 1870 courthouse wood that’s so significant to Loudon.

Once the courthouse is rebuilt, the box will remain there and safe above ground. I’m working with people on collecting stories to put in the new capsule that will go in acid-free envelopes and sealed plastic. We may include some of the 1970 remnants into the new capsule as well.

Everything has kind of come full circle. Loudon lost so much when the courthouse burnt and when we lost the capsule. I just hope I’ve been a good resource for everyone here and look forward to rebuilding and starting a new, more protected time capsule!