The nationwide uprising for racial justice could spur fundamental shifts in how Americans remember and reckon with the past. Join us to learn how your library can play a constructive role by hosting a virtual film screening and discussion program.

In this webinar participants will hear from the librarian who led the writing of a community discussion guide for "An Outrage [2]," a Smithsonian-premiered, award-winning documentary film about the history and legacy of lynching in the American South.

Participants in this session will learn how to:

Funding for this webinar has been provided by the National Endowment for the Humanities (NEH) as part of Coronavirus Aid, Relief and Economic Security (CARES) Act economic stabilization plan. 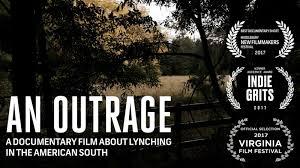 Joslyn Bowling Dixon is the director of Newark (N.J.) Public Library. She has a wealth of experience working in large urban public libraries spanning more than 20 years. Prior to Newark Public Library, she was the deputy director of the Prince William Public Library System in Virginia, where she supervised 11 regional, community, and neighborhood library locations. Over the course of her career, Bowling Dixon has assumed many different roles in both supervisory and administrative capacities, including branch management and leading programs for children and young adults. She views the role and operations of libraries through a diverse lens, having worked in library systems in Illinois, Maryland, the District of Columbia and Virginia. She is a graduate of Hampton University (BA, English) and Dominican University (MLIS). She is an At-Large Councilor of the American Library Association and an active member of the Public Library Association, Urban Libraries Council, and the New Jersey Library Association.

Hannah Ayers and Lance Warren are Emmy-winning, married documentary filmmakers working at the intersection of history and social justice. Their films include "An Outrage," distributed by Kanopy and Teaching Tolerance; and "The Future of America’s Past," airing on PBS stations nationwide. Since 2009, their work has tackled historical memory and justice through piercing personal stories of struggle and resilience.