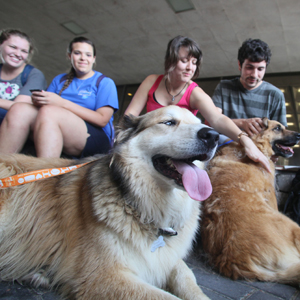 In the past few years, it seems that every academic cycle brings more news of universities using therapy dogs to ease the stress of students during finals week. One of the first instances to hit mainstream media was the report in the March 21, 2011, New York Times [2] that the much revered Yale Law School was now circulating a certified pet therapy dog named Monty through their library. It was clear that America’s growing inclusion of pets into everyday lives was making its way into our libraries. It’s become part of our culture to believe that pets enhance our lives in many ways, especially when concerning our health and mental well-being. The use of therapy dogs to ease the frustrations of early readers has been a common program in public libraries across the country, so it isn’t surprising that the use of pet therapy would begin to filter into other areas of education.

The idea of hosting a pet therapy event at my library, the Linus A. Sims Memorial Library [3], had occurred to me several years ago. Sims Library is the main library at Southeastern Louisiana University in Hammond, a small, college town about forty-five miles northwest of New Orleans. Southeastern is regional university enrolling just over 15,000 students, making it the third largest university in the state. While some graduate degrees are offered, the vast majority of students are undergraduates, and while students hail from a variety of states and countries, most are from southeast Louisiana and commute to school rather than live on campus. Although I wanted to try a pet therapy event, I initially dismissed it, knowing that severe budgetary constraints issued on the state level would make it nearly impossible to pay for a trained therapy dog, and no local volunteer organizations existed in the immediate area. Soon, though, my volunteer work with local rescue organizations sparked an idea: plenty of dogs in area shelters are gentle enough to participate in a pet therapy event for college-age students, and it would be a great opportunity to help socialize adoptable dogs. 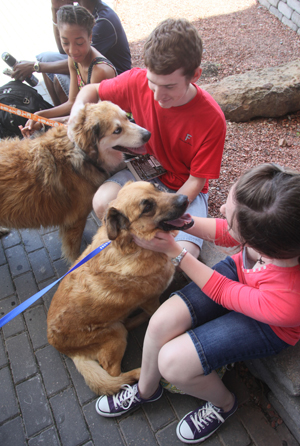 Upon presenting the idea to the library Outreach Committee, I was met with some enthusiasm and more than equal amounts of doubt from my colleagues. Those who doubted thought that the college students would find it silly, or they didn’t quite understand the benefit that the event would provide. Despite the reservations of others, I pursued the event by contacting a local humane society that I knew had participated in service-learning initiatives at the university. One of my main concerns was that a rescue organization would not see the value in an event that was not centered on adoption, considering college students are not usually in a position to care for a dog. The Saint Tammany Humane Society, located about twenty miles away in Covington, Louisiana, was immediately interested in the idea, recognizing the innate value of participating in the event regardless of the fact that adoptions would not occur. Instead, the benefits for their organization were socialization for the dogs and the opportunity to recruit volunteers and advertise internships. For rescue organizations of this type, volunteer support is the only reason they can offer their services, so recruiting dedicated volunteers is extremely important and thus highly valued.

Probably the primary reason that the event turned out to be an unprecedented success was the marketing campaign. While many of the events we sponsor at the library are attended by Southeastern students and staff as well as the community of Hammond and Tangipahoa Parish, because this event was developed as a way to relieve exam-related stress, it was marketed exclusively to students through outlets that would catch their attention. As even the most casual users of the internet know, a cute animal will garner lots of attention. Thus, I designed a very basic, yet bold, flyer that asked “End of semester work have you stressed?” at the top. Roughly 60 percent of the flyer was a stock photo of a close-up of two yellow lab puppies napping while snuggling. The bottom quarter gave the particulars of the event, but it was the picture that made the flyer so successful. We printed it and placed it in various places in the library, but also converted it to a .jpeg picture file and uploaded it to our Facebook page. The impact was immediate and completely unexpected. Although our Facebook page was updated fairly often and we had roughly 300 “likes” making us relevant, we were not reaching as many people, especially students, as we would have liked. In the forty-eight hours following the posting of our pet therapy flyer, the picture was shared twenty-two times and “liked” more than fifty times, gaining exponentially more attention than any other post. In addition to being shared by individuals, it was picked up by the official university Facebook page and the campus newspaper page. Other than this, our only publicity effort was to send the information to our campus public information office, which disseminated it to the university webmaster and area news outlets.

Planning for the actual event was nearly as easy. We chose to host the dogs outdoors in a breezeway area next to the library that would allow for lots of room for the dogs to be walked around. Also, we chose an outdoor location because with untrained shelter dogs there was a higher likelihood that there would be an “accident.” I had asked the Humane Society to bring about half a dozen dogs of all types and sizes, as long as they were friendly. I also asked for volunteers from the library who were charged with holding onto a dog’s lead, since we were not operating in an enclosed area. We painted large posters so that students would be able to pinpoint the location from across campus. We provided a table and beverages for the Humane Society. They used the table to distribute information on volunteering. They brought water bowls for the dogs and clean up bags for any messes. Essentially, putting together the actual event required very little effort, especially considering the impact. 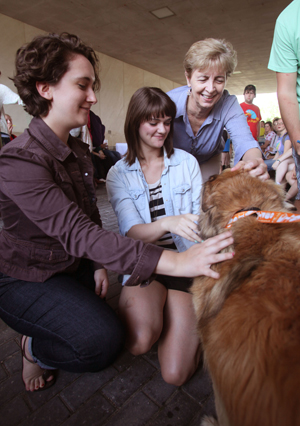 We expected that the event would be popular based on the response we had gotten from Facebook and from student reactions in the library. While setting up, it became increasingly clear that the event would be extraordinarily successful. Roughly twenty students showed up to stake out a spot almost half an hour before the start of the event. We estimate that more than three hundred students stopped by to see and pet the dogs, which far outnumbered any event of any kind that the library had ever sponsored. Since most of the students at Southeastern are commuters who drive to campus for class and do not usually participate in campus events, a showing of this magnitude was nothing short of a coup. In addition to student participation, we received quite a bit of media attention as well. As expected, the campus newspaper covered the event, but two other newspapers featured the pet therapy event with extensive write-ups and pictures: the local paper, the Hammond Daily Star [4]; and the Advocate [5] of Baton Rouge, the second largest newspaper in the state.

Despite being a tremendous success, I found several areas in which the event can be improved. Firstly, we initially called it “Puppy Therapy,” thinking that the diminutive form of the word was cute and therefore catchy. We were clear on the flyer that the dogs would be rescue dogs, but a very small percentage of participants remarked that there were no tiny puppies in attendance. Thus, we will be calling it “Pet Therapy” in the future. We had scheduled the event from 11 to 2 p.m. on a Thursday, noting that many students had a break from class during that time. While the general time period was perfect, after two hours, the dogs started getting tired and rather than eagerly walking up to new people, decided it was time to take a nap, so next time the event will be limited to two hours. We are also going to explore the possibility of hosting the event indoors so weather won’t be a concern.

Although I was sure that our pet therapy event would be fun and well-received by those who attended, I did not anticipate that it would be the most successful event that the library ever hosted. I attribute this to the nature of the event itself as well as to the minimal, but impactful, publicity. Once the event was over, everyone who doubted the validity of such a program was converted. Even if they thought it was a silly idea, they couldn’t deny that the students enjoyed it and that it generated excellent publicity for the library through local media. It also expanded our Facebook reach, as we gained nearly one hundred new followers based on the event’s popularity. An event of this type would be easy for almost any university to host, but could also be adapted for use in teen programs for public libraries or school libraries for high schoolers. Any environment in which users would be open to interacting with lovable mutts who may not have perfected their manners just yet, but who know how to cuddle and love, would find this an enjoyable and worthwhile program.