So you want to run a Minecraft program at your library? Great! Minecraft is a crowd-pleaser, is easy to adapt for a whole host of ages of interests, and, once you've got a plan, is a very easy program to run. We've been playing Minecraft several times a month at our library for two years now, and the excitement surrounding it doesn't seem to be waning at all among the older elementary and middle school-aged children of our village.

If you've never done a Minecraft or PC gaming program before, though, there are a few things to consider. I will touch on a few of the biggest considerations and give some advice based on what has worked for us. So grab your diamond pickaxe and read on! 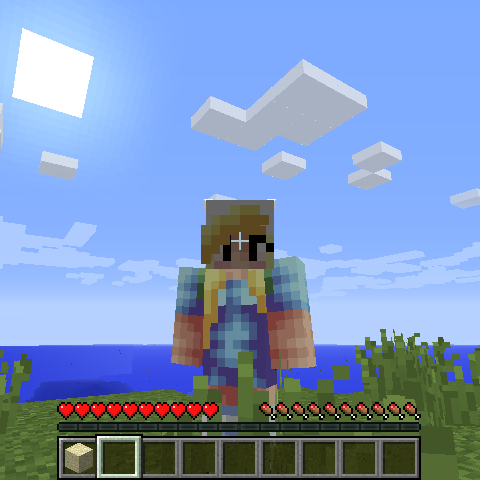 Who will run it?

This is, of course, an important question to ask of anything you do at your library. Will you do it yourself, or get a volunteer? I would suggest that the facilitator of your Minecraft program should possess several qualities: They must be good with children, at least somewhat familiar with the game, have a pretty good grip on technology in general, and be good with children.

Being good with kids almost goes without saying, of course. The facilitator needs to be able to be calm in the midst of what can become a pretty rowdy event, so make sure they can focus amidst chaos and remain calm when dealing with a number of children, some of whom may need help mediating disagreements during gameplay.

Familiarity with the game doesn't need to be comprehensive to be useful. When I started running Minecraft programs, I purchased the game for myself and began playing around with it. I didn't become an expert by any means, but I know enough to get around. I don't always play with the kids during the program, but it's good to be able to. They'll love showing you what they're doing, you'll be able to keep a more watchful eye on the players, and if there is a newbie in their midst, you'll be able to assist them with some of the basic controls.

The technological side of things can get a bit tricky. In my experience there is always (and I mean always) some sort of technological issue when we go to play Minecraft. If you use your own PCs, this can be mitigated considerably, but if you encourage children to bring their own laptops, be prepared for there to be connection issues, for someone's JAVA to not be allowed through the firewall, for someone to have problems with lagging, etc. You need somebody there who can solve these issues, or a player is going to be left out of the fun. Not cool.

When you play a cooperative game of Minecraft, you basically have three choices of how to connect: play a LAN game, play on a remotely hosted server, or play on a locally hosted server. Basically, the difference is this: a LAN game means that players in one location can play in a shared game world on their own computers over the LAN (local area network). Their computers can be either hardwired to the network via cables, or connected via WiFi. A server game is a game played over the internet. The game world is hosted on a computer dedicated to the task, and players connect to it remotely. All players do not need to be in the same location for a game on a server. You can play on a remote server (which could be located almost anywhere,) or on a locally hosted server that you've set up in your library. Setting up your own server is a bit more complicated and can require resources that may not be available to a smaller library, so for the purposes of this article, I will be discussing only LAN games and remotely hosted servers.

There are pros and cons to both LAN games and online servers. Here are some of them. (Some I've learned the hard way!)

If you don't shut down your server after each session, players will be able to get on from home. This can be great, if they're using this increased access to continue work on something they created during a library session, but some kids will use this as an excuse to cause trouble. We left our server up 24/7 when we first started doing Minecraft programs, and a couple troublemakers went on during off-hours and "griefed" the other kids' creations. (Griefing is basically the gaming version of kicking someone's sandcastle over. It's rude, but some players consider it part of the game, and once someone starts it, it can become endemic.)

To buy or not to buy (licenses, that is)

The way Minecraft works is that you purchase a license that you associate with a username and password. The licenses cost $26.95 at minecraft.net, and once you've purchased it, you can play the game anywhere. You just need to log in using the associated e-mail address and password.

Therefore, players who have already purchased Minecraft at home can play on your library computers with no problem. So, should you purchase licenses for the library?

We did. Our library bought four licenses and attached them to library e-mail addresses. We did this so that children who did not have computers at home, or who didn't have the money to purchase their own licenses, could play at the library. This also had the unintended benefit of assisting children who have their own licenses, but don't remember their login information when away from home. (This happens way more often than I would have anticipated!)

At our library, we will "lend" the licenses out if asked, whether it is during a Minecraft program or just regular library hours. A staff member has to log the child in, and they are expected to log out when they're done. Nobody is given the password, so they can't go home and play on the library account unsupervised.

This has worked well for us. Four seems to be a good number of accounts to have, as most children do already have their own, and with this number, we can typically accommodate anybody who doesn't. If you have a larger library, or a library in an economically depressed area, you may want to purchase more. If all of the children seem to have their own accounts, you may need to purchase less. I would recommend purchasing at least one or two, though, just to have them. It's a one-time cost, and definitely worth it! (Even if only your staff facilitator ends up using it!)

So there you have it!

I haven't covered every consideration by any means, but this is a good start! Decide on a good facilitator (or make yourself into one). Get a server (or not.) Buy some licenses. Then you're (almost) ready to play!

Next time, we'll talk about the fun part: what kinds of Minecraft programs you can do once you're set up!