It’s been a hard week for many Americans, as Tuesday’s election amplified divisions within communities and flamed feelings of isolation, anger and fear among much of the population. As the dust settles, libraries across the country are coming up with ways, large and small, to make all people feel safe and welcome, regardless of who they are or which candidates they supported. Here are some of those ways.

On Thursday, Nov. 10, more than 200 people showed up for a post-election conversation [2] with community leaders at Princeton (N.J.) Public Library. The library had announced the event just 24 hours earlier, inviting people to come together, partake of coffee, tea and mulled cider, and bring a dessert to share with their neighbors.

The event was attended by the mayor and leaders of local nonprofits, churches and human services organizations, said Programming Librarian Janie Hermann.

Many libraries have set up displays to capture some of the themes and moods prevalent in this post-election time:

A photo posted by Princeton Public Library NJ (@princetonpl) on

If you're looking for selections on the theme of unity and peace, check out the Association for Library Service to Children (ALSC)'s "Unity. Kindness. Peace. Booklist [10]."

Whichever topic you choose, pay attention to the book covers.

“Representation matters,” said Library as Incubator Project [11]co-founder and editor Erinn Batykefer. “A book display that includes and celebrates many people — queer, Muslim, African American, Asian, Latino, etc. — and shows them on the cover may be the most comforting and necessary thing for folks in your community to see. It reminds them that they matter and are welcomed and respected in the library space."

Telling people the library is a safe space

Another way to make people see the library as a safe space is to tell them it is one.

When Ferguson, Mo., erupted into protests following the killing of unarmed teenager Michael Brown in 2014, the local public library did a great job of showing residents that it was a safe harbor. Library Director Scott Bonner posted a seemingly simple sign [12] in the library: “During difficult times, the library is a quiet oasis where we can catch our breath, learn and think about what to do next. Please help keep our oasis peaceful and serene.”

Bonner shared a similar sentiment when tensions flared this week.

You may have read that New Yorkers are sharing their post-election feelings [14] on the wall at the Sixth Avenue L train subway underpass. The art installation, called Subway Therapy, has grown to more than 1,500 notes.

Princeton Public Library created their own wall [20]; all it requires is some Post-its and a blank wall space. (As always, be sure to monitor the wall for notes that aren't in the right spirit.)

Kyna Stys, teen library associate at the William F. Laman Public Library in North Little Rock, Ark., created these tear-off posters to hang in her teen department last summer, but she hung them up again this week. Since hanging them up two days ago, she has gone through five sheets. 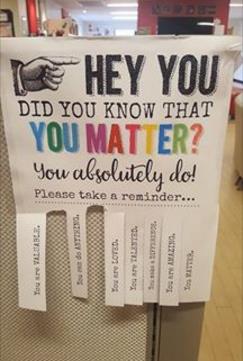 "Most teens shyly took a tab, some asked if they could have one, and a few thanked us," Stys said. "There has been no excitement or loud exclamations like other displays we have. I feel that this was something they needed but are not ready to admit they need."

Libraries are neutral, apolitical spaces that are open for everyone, so it makes sense that the library would be a natural place for dialogue. There are numerous free resources on the web for libraries to bring communities together in conversation. (See ALA's Libraries Transforming Communities [22] resources, for example).

Is now the right time to jump into a dialogue? "I think in the coming days dialogue is critical, and so libraries should be encouraged to consider providing a space for it," said Courtney Breese, program director for the National Coalition of Dialogue and Deliberation [23].

Breese recommended that newcomers to the community engagement/deliberation arena check out Conversation Cafe [24]; its simple process is outlined on its website.

Hands-on or DIY activities can be healing; sometimes people just want to turn off their brains for a bit. Possible activities include a drop-in stress relief program [25], meditation class [26], adult coloring program [27], or a more involved DIY project [28].

Doing what libraries do best

It may not be fancy, but perhaps the most powerful thing libraries can do this week is to do what we do every week. “The biggest thing we can all do right now is what we do best: service,” said Mallory Arents, head of adult programming at Darien (Conn.) Library. “Welcome every single patron who walks in your door.”

Wise words from a wise woman, spotted on the wall of our Dweck Center. pic.twitter.com/wUSwtm3O68 [29]

How is your library responding to the election? Tell us in the comments.