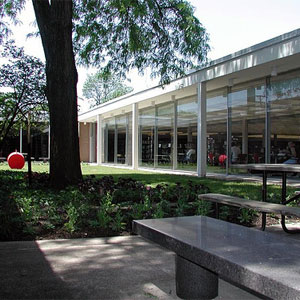 One of the best programs we have had at the Skokie (Ill.) Public Library [2] was not my idea, nor the idea of any of our staff. It was brought to us by some members of the Indian community who wanted the library to have a program in honor of Mahatma Gandhi. At the time, the United States was engaged in wars in Iraq and Afghanistan. We were reading daily about conflict in Sudan and elsewhere in the world. One can feel helpless and ineffectual when confronted with violence on such a large scale. How might Gandhi’s teaching help? “Let’s talk about peace in everyday life,” they suggested. “Each of us can make a difference in how we live our lives.”

A couple of leaders from the local Indian community put together a program that centered on a discussion among about twenty-five participants who were seated around tables in a square arrangement so that everyone could see each other. They lined up several people from different religious traditions, including a Hindu, a Sikh, and a Jain, who each spoke for fewer than five minutes about a religious basis for peace and non-violence. The participants in the discussion were the first twenty-five people to register for the program and represented a cross section of ages and ethnic backgrounds. About forty additional attendees sat in chairs in rows as observers to the discussion. The Indians had asked me as library director to moderate the program. Eager to be supportive, I readily agreed, but as the date of the program approached I began to have doubts. What if people don’t talk? What if someone talks too much? What happened, in fact, was that people spoke from experience, sharing personal stories and listening to each other with evident respect. A teacher spoke about dealing with the bully on the school playground and an attorney talked about the importance of trust in arbitration. I felt privileged to have the opportunity to engage with such a group in which everyone participated and shared so thoughtfully. And I have stayed in touch with the program organizers.

Maybe because I had this very positive experience with the program on peace in everyday life, I was intrigued when I saw a notice about moderator training offered by the Project on Civic Reflection [3]. I signed up for the day-and-a-half-long session, not knowing anyone else who would be attending. Twenty-six of us gathered at a site in downtown Chicago, enjoying snacks and casual conversation as the group assembled. One of the first persons I spoke with was Anita Luk, who was on the participants’ list as director of the Chinese American Museum in Chicago. “But I live in Skokie,” she told me. A connection was made, and I took this as a sign that I was indeed in the right place at the right time. I learned from Adam Davis, director of the Project on Civic Reflection, that Jerry Klarito, a member of the Skokie Park Board and someone I knew was active in the community, had previously been through the training. I began to see possibilities for Civic Reflection programming in Skokie. The Project on Civic Reflection model starts with a short literary text or, in some cases, an image that everyone can take in at the time of the session, followed by a facilitator-led discussion. Similar to the Great Books approach to book discussions, the playing field is leveled because all participants have completed the same reading, which is discussed in light of the individuals’ life experience, not by bringing to bear knowledge of literary criticism, the author’s background, or other literary works.

The Civic Reflection model has application in many settings. I introduced one of the readings from a collection on giving to the board of a mental health agency on which I serve. Some of the members had expressed their discomfort with asking people for donations. The reading brought to light the good feeling that people get when they give to a worthy cause. Reflecting on this angle of the giver’s experience helped the members feel more comfortable with making the ask, an important part of their responsibility in serving on the board.

So how does Civic Reflection programming fit into the library’s mission? Certainly, facilitating text-based discussions is something familiar to most librarians. Libraries have accessible meeting space in a setting that is regarded as welcoming and without prejudice. The more digital and virtual some of the library’s services become, the greater is the need for the balance of in-person interaction. Civic Reflection may be the antidote for people who have been isolated at their computers, exchanging one-liners on Twitter. Libraries’ core mission is the promotion of life-long learning. True learning and insight are much more likely to occur in lengthier engagement that is face-to-face. We pick up information from each other’s body language and communicate feelings by looking into one another’s eyes. In-person small group discussion relies on trust and builds community. And isn’t that what libraries are all about?

Editor’s note: Check out our list of civic engagement resources [4], which includes information on the ALA Public Programs Office’s ALA Annual Conference preconference, “Civic Reflection Builds Community Connections: A Program Model for Libraries.”