Yukon Public Libraries is big on geek culture. We collect comics, graphic novels, role-playing game rule books, anime, medieval cookbooks and costuming manuals, and we host a popular weekly role-playing game (RPG) drop-in program for teens. So naturally we saw a place for ourselves at YukomiCon [2], the biannual celebration of geek culture organized by the Yukon Comic Culture Society. 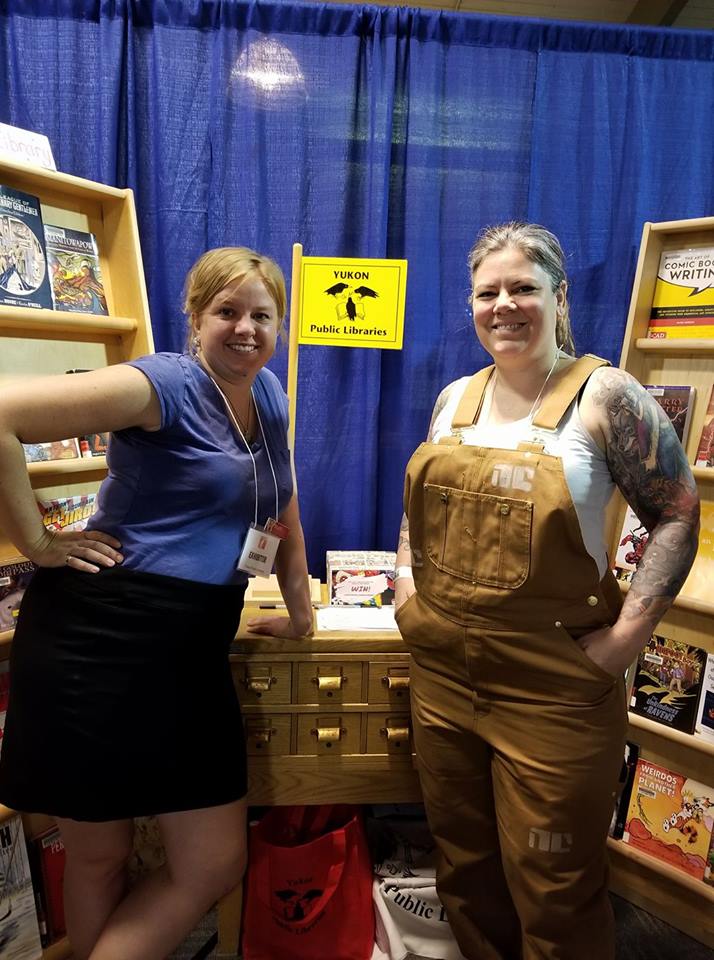 It's a ton of work, but it's totally worth it.

This was our second pop-up at YukomiCon. We learned a lot from the first one, as did the organizers. At the first convention people were surprised and a bit confused as to why the library was there. This time around it made sense to people. Now I imagine if we don't go every time, people will ask why we weren’t there.

So why do we do it? Since “it's super fun" isn't a great reason to get your boss (and maybe your boss’s boss) to support what is, ultimately, a costly event (both in staff time and actual budget dollars), here are 10 reasons you should absolutely pop-up at your local comic convention.

1. You are marketing your product to folks who don't come to the library and may not know what resources are available.

We knew we were on to something at our first YukomiCon, when we lost track of how many times we heard, “I can’t believe the library has THIS.” Nothing beats watching the wheels turning in someone’s head as they realize the world of possibilities that just opened up to them as they remember that the library exists.

2. You are showing folks who DO use the library that you are present in the community.

We really knew we were on to something at our second YukomiCon, when convention-goers expected us to be there — and even checked out books using their library cards as if that was totally a thing (which, of course, it is).

3. You get to talk about books all day!

One of the highlights for me was when a dad, who had clearly been dragged to the event by his teenage daughter, asked where a person who’d never read a graphic novel could start. Those are the questions we live for! Be prepared to talk. A lot. Send your most confident staff because some of our more productive interactions would never have happened if we hadn’t invited passers-by into the booth and got them talking.

4. You learn what people are interested in so you can do better collection development.

Who knew there was a Lord of the Rings Pathfinder Guide? A few months ago, probably not very many people. Today, you can check it out at Yukon Public Libraries.

Chatting with people gives you great insight that you can’t get from circulation reports. I found the best conversations were about why people don’t come to the library. You won’t win them all over, but when you do connect with someone, you can have some rich interactions.

I remember one woman saying she doesn't come to the library because she likes to buy books. I told her I also have a bookshelf at home! After chatting a while, I suggested checking a comic out of the library is a great way to see if you like a series before you commit to starting to collect it. It felt like a victory to see the look of realization come over her face that this was, in fact, an excellent idea.

We heard variations on the “I like to own books" theme throughout the weekend. There are still lots of folks who don't know that there are things besides books available to them through the library, such as programs, meeting space and electronic resources. And there are lots of adults who still think every library is like their childhood school library, and every librarian is like that “one librarian." Even though you won't win them all (like the gentleman with a phobia of used things), getting people to think about the public library is a good thing. 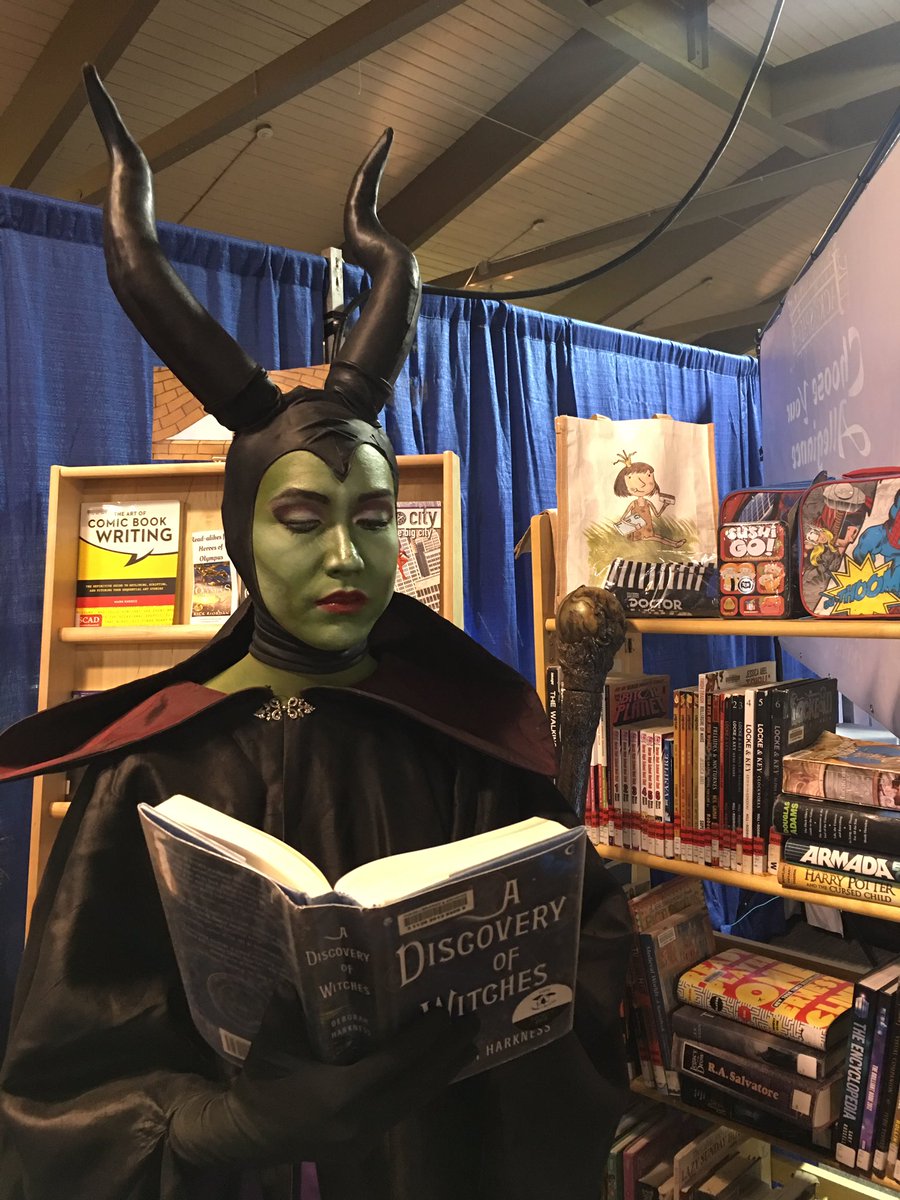 I’m sure I’m not the only one who enjoys marking ticks on a statistic sheet, and comic conventions are BUSY. We had 243 booth visits (that is, people actually entering the booth and looking around), 20 directional/quick questions, 5 in-depth reference questions, 4 new library cards, 10 card updates or replacements, and 25 unique check-outs (individual transactions, not individual items).

Pro tip: your feedback forms can also act as a ballot to win cool prizes. Put the ballot box at the back of the booth, then put a candy bowl next to it.

8. You will help normalize the fact that the library belongs to the people.

Many attendees at comic conventions are young. And while you probably won't get deep enough with booth visitors to discuss the idea that the public library represents the democratization of information, taking a book suggestion and then calling the patron when the book arrives at the library will hopefully instill a lifelong relationship where the person knows the library has a relevant place in their lives.

Three days at a comic convention allows for many discussions with local businesses, artists, volunteers and others in the community that may have overlapping interests and mandates with the public library. Being able to meet authors in person is also useful, as our library system organizes author tours twice a year and we are always looking for new authors.

One fun thing that we did throughout the weekend is ask cosplayers to choose a book and be photographed for our Twitter. These posts had great engagement and garnered us new followers.

Seeing people get excited about your resources is inspiring and rewarding. Getting to share our love of books, reading and reading culture is a lot of what drives us as library workers, and enthusiasm is a great place to start when you’re marketing the library.

This year, our booth was in a more central location so we saw more traffic. We also did away with the ubiquitous staff-behind-a-table model that most vendors operate by, and instead focused on creating an open and inviting space for browsing books. We lined our booth with display shelving to encourage browsing and had a couple comfy chairs for reading. After we packed up and brought everything back to the library, it was clear to everyone who worked the convention that the pop-up library was a success. But what made it a success?

There are many reasons why doing a pop-up library at your local comic convention is a great idea, and each community will no doubt find ways that they can fit in with their local comic society. It’s a ton of work, but also an investment in your community.

We are fortunate to live in a town with a great comic book store that has helped us build our graphic novel collection over the past few years. Our city is also lucky to be the home of several creative and energetic people who make things happen. The library is an integral part of that community. Our involvement in YukomiCon over the last couple of years has led to partnerships that we wouldn’t have known could exist had we not taken this plunge.

I will leave you with a story that illustrates how being in the right place at the right time can have lasting effects.

We had fliers for our weekly RPG teen drop-in program at our booth, and some boys who were too young for the program asked if there was anything similar at the library for them. I told them there wasn’t anything yet, but that they should attend the session just about to occur in the next building, where RPG enthusiasts were meeting and discussing the needs of the community.

Our program facilitator, Chris, was at that meeting and reported that these kids — who didn’t know about the session before visiting the pop-up library — contributed greatly to the discussion. In 2018, we are piloting an adult RPG drop-in program run by volunteers from the community. From this, we hope to grow the local pool of competent DMs (RPG leaders) so we can expand beyond our teen program to include a weekly RPG drop-in for tweens. Tweens like those young people — who found their way into our pop-up library inquiring about "Dungeons and Dragons."

Related Links
A 'Comic-Con' by Any Other Name (Or, How Not to Commit Trademark Infringement with Your Library Comic Event) [3]
Magic of Comics and Cartooning Workshop [4]
Connect with Comics: Join the Festivities of Free Comic Book Day [5]
©2008–2020 American Library Association
Public Programs Office | 225 N. Michigan Ave., Suite 1300, Chicago, IL 60601 | Contact Us