Pixilation is a stop-motion technique using people as the subject of an animated film. It resembles human puppetry as live actors repeatedly pose for a sequence of animated frames. This type of animation also makes use of large props and other found objects. Pixilation is a great way to explore stop-motion animation and could be incorporated into science classes, storytimes and beyond.

Each year the Evansville Vanderburgh Public Library (EVPL) offers animation programs ranging from outreach classes to one-day-workshops, summer camps and more. Students learn  about different  types of animation and the history of animated film. They create videos in a variety of formats including sand, light and pixilation.

Pixilation programs help introduce students to the process of stop-motion animation. They learn how animation is captured frame-by-frame in a stop-motion sequence. Pixilation is shot incrementally as students reposition themselves for each frame. Students build digital literacy skills while learning to work with peers in a fun, interactive environment.

In addition to animation camps and workshops, youth librarians have incorporated this type of animation into storytimes. For example, one storytime pixilation included the picture book "Where Do We Go When We Disappear?" by Isabel Minhos Martins. After being read the book, students created a pixilation video that experimented with vanishing using stop-action photography. The storytime allowed us to combine an early  literacy program with technology in an innovative way.

Another way to teach pixilation is by integrating it into a science program or Teen Tech Week activity. In our “Mad Science” programs at the EVPL, students learn about optical illusions and visual perception. After discussing concepts like “the persistence of vision,” students create pixilation videos that explore motion perception in animated film.

The primary marketing strategy that the EVPL utilizes is programming calendars in print and online. Calendars are available for public viewing about two months in advance of a particular program. Our printed calendars are separated into three groups: adult, teen and kids. This distinction aids in reaching our target audience. Aside from our calendars, we promote events with social media, printed posters and through our website.

Due to this comprehensive marketing strategy, animation programs like pixilation can be completely filled up with the addition of a waiting list. These classes have registration required for attendance and this approach helps us know who will be in attendance. As a result, patrons feel inclined to sign up while there is still room available, which almost always guarantees a full class.

Registration also helps to control class size. It is important to manage class size since pixilation involves live-action choreography. Participants need enough space to move freely throughout the room. Otherwise, the animation could appear cluttered as often happens when students use too many toys for a traditional stop motion film.

Pixilation is a program that incorporates technology without the high cost often associated with digital media programs. The program requires either a stop-motion app, such as Smoovie, or a software license, like Stop Motion Pro Eclipse. The app will be cheaper than the license but will require an iPad or tablet with built-in camera. In the past, the EVPL has used both Smoovie and Stop Motion Pro Eclipse to create animated films.

Additional costs include any supplies used in the creation of props, such as colored paint. The iPad may require a stand and iPad attachment clip to position the camera, as well. Several vendors sell iPad attachment clips that can be attached to a microphone stand or tripod. This enables the camera to shoot at eye-level and adjustable heights.

It is recommended that your library cut costs based on its budget. Something as simple as a book stand and table can be used to position the iPad’s camera at a good height. Props can be made from cardboard and found objects available at hand. There are also a number of free stop-motion apps available in addition to Smoovie.

Pixilation is a unique activity that requires very little set-up. Once you have all your technology together, consider the environment and camera angle. The more space the participants have, the more they will be able to interact with friends and props.  Shooting the length of the room is a good suggestion but thinking creatively is encouraged too!

In the past, we have used USB extensions to attach a small camera to the ceiling. This allowed us to shoot overhead of the subject from a bird’s-eye view while controlling the camera’s shutter from the software. A similar angle can be seen in the video titled “Pixilation HND1” on YouTube. While this is a much harder angle to shoot from, it does yield very interesting results.

Ultimately, the time it requires to prepare for a pixilation program will depend on your room set-up. The number of props and other objects used in the film will affect how much time is required to prepare.

Once the room is set up and the props are arranged, it is time to have fun and create the animation video. Step-by-step instructions for  shooting a pixilation video can be found in Michelle Hlubinka’s article, "Pixilation: Full-Body-Stop-Motion Animation,” published in Make Magazine. The article describes at length the pixilation process, in addition to offering links to various examples and a how-to tutorial. It is one of the best resources available for animators. Youth librarians at the EVPL have used it to aid in the execution of these programs.

In addition, software tutorials are available on the Stop Motion Pro Eclipse website. The tutorials help to explain the software and range from getting started to more complex projects. They could also aid in the creation of your animation short as they explain different tools in the software.

Whether your goals are science-related or technology-based, you'll soon discover that students are eager to provide feedback and ideas as the video gets started.

When designing a pixilation program, try to have a couple ideas in mind of what your participants will be doing.  Props tend to make this brainstorming process much easier. In addition to cardboard cut-outs, we have used cheap materials like garbage bags, blankets and other common items.

For example, in the pixilation storytime based on Martins' book, students disappeared into a “black hole” on the floor.  The hole was simply represented by a black garbage bag. They  then reappeared out of a large cardboard box in the back of the room. The large box was originally used to ship library furniture and made the perfect, life-size prop.

Furthermore, there are a lot of great videos in addition to “Pixilation HND1” that are searchable on YouTube. These videos provide excellent examples for students and often inspire ideas. One video titled “Pixilation 2010” was created by McMaster University students and includes some interesting examples of group choreography.

Lastly, the website teachanimation.org contains a lesson plan called "Pixilation— Animation in the Artroom." It discusses ideas for pixilation including swimming, driving, flying and floating. All these actions can be recreated through a series of stop-motion photographs that capture different movements.

Pixilation is a stop-motion technique using people as the subject of an animated film. It resembles human puppetry as live actors repeatedly pose for a sequence of animated frames. This type of animation also makes use of large props and other found objects. Pixilation is a great way to explore stop-motion animation and could be incorporated into science classes, storytimes and beyond.

Resembling human puppetry, pixilation is a stop-motion technique using people as the subject of an animated film. 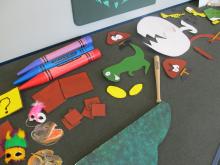 The Evansville Vanderburgh Public Library serves the 180,305 residents of Vanderburgh County. This southwestern Indiana county covers 233 square miles, with a population density of 770 people per square mile. Evansville is the largest metropolitan area within a 100-mile radius. The EVPL, a "star" ranked library, provides a variety of resources and services to this population group throughout its eight facilities.

Have a great program idea from your library? Share it with us.